If you’re a meat free eater and a fast food fan, get yourself down to Leicester Square, central London, where for the next month Burger King will be serving only plant-based food.

The pilot scheme will see the company’s refurbished flagship restaurant transformed into a paragon of environmental virtue from March 14 to April 10, with all of its traditional fare still on offer, just served up without the meat.

In fact there are 15 new plant-based item on the menu, including a Cheeze and Bakon Whopper, Double Cheezeburger and Cheese and Bakon Royale, as well as the plant-based versions of its new katsu range, the Katsu Vegan Royale and the Katsu Whopper Double. There will also be a meat free children’s menu. And you can guarantee that anything that flies off the shelves in Leicester Square is likely to be seen nationwide in the near future.

Not only that, but while the meat free trial is running in London, Burger King UK has pledged to donate 10p from every Plant-Based Whopper or Vegan Royale sold around the country to the urban tree-planting charity Trees for Cities.

Many of the new Burger King offerings have been made in conjunction with The Vegetarian Butcher, which makes protein-rich meat alternatives from lupins. It is also responsible for the Domino’s Peppero’nay Pizza and the Starbucks Tu’nah Sandwich.

“By powering Burger King’s plant-based offering and first meat-free restaurant in Leicester Square with our Plant-based Whopper, Vegan Nuggets and Vegan Royale – all of which are available nationwide – we’re providing meat-lovers the chance to cut-down meat without compromising on taste,” said Laura Iliffe of The Vegetarian Butcher. “We challenge you to taste the difference!”

Burger King’s Katie Evans said the company was “incredibly proud” of a meat free menu that “reflects our ongoing commitment to serving our customers a diverse and innovative range of products”. She added that the limited-edition menu was “a direct result of our focus on vegan and plant-based innovation, and goes hand-in-hand with our target of a 50 per cent meat-free menu by 2030, as well as our commitment to sustainability and responsible business.” McDonald's launches McPlant in the UK 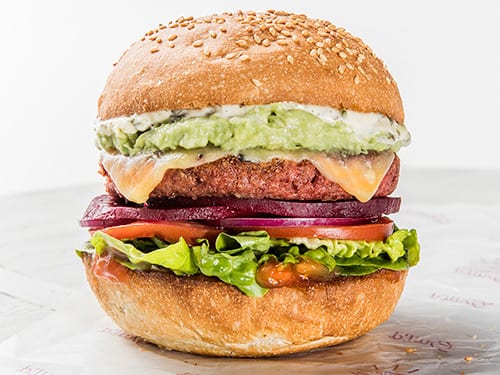 Manchester gets its first Veggie Pret